"Totality, no matter how long its duration, seems to last no more than eight seconds.” This remark, by former Sky & Telescope magazine editor Norm Sperling, succinctly describes the eclipse experience for many, particularly those encountering totality for the first time.

The following list is a guide of things to look for before, during, and after totality. In several cases you’ll be conflicted. For instance, you can’t block the crescent Sun with your thumb to spy the corona before totality starts and simultaneously watch the approaching lunar shadow. But if you’ve never experienced a total solar eclipse, this list will help you know what to expect, and when.

Of course, much of what's described below won't apply if you're outside the path of the Moon's dark umbral shadow; in that case, you will see only a partial eclipse — which is why you should make every effort, if possible, to get yourself into the path of totality on August 21, 2017. 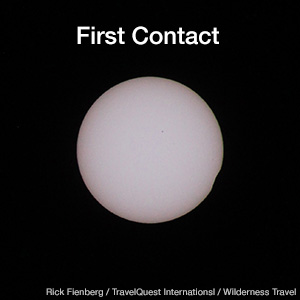 First Contact: The Eclipse Begins The Moon touches the Sun and takes its first tiny nibble out of the solar disk. First contact is initially visible through a telescope, then in binoculars, and finally with the unaided eye. Regardless of how you view it, observing with a safe solar filter is an absolute must.

The Vanishing Sun During the next hour or so, the Moon hides more and more of the Sun. It’s a leisurely affair, so you have plenty of time to look around. As the eclipse progresses, can you detect any change in the color and quality of the sky, the clouds, nearby objects, and distant landscapes?

Changing Light Once more than half the Sun is covered, the light begins to fade, though imperceptibly at first. About 15 minutes prior to totality, the light becomes noticeably dimmer and starts to take on an odd or eerie “tint.” Shadows become sharper and more detailed. Look away from the shrinking solar crescent — has there been a change in the color of the sky and clouds since the eclipse began?

Sharpening Shadows As the Sun dwindles to a thin crescent, shadows become much sharper. Look at your own shadow — notice how you can see the shadows of individual hairs on your head or arms.

Animal and Human Behavior As the sunlight dims, you may spot the local fauna acting in a peculiar manner. Many start to settle in as if night is falling. Notice the people around you — they’re likely more animated than any local wildlife!

Weather As totality nears, you may notice a perceptible drop in the temperature, and the wind may pick up or change direction.

Deepening Darkness Look west a few minutes before totality. Can you see the oncoming umbral shadow? Clouds on the horizon will go dark as the Moon’s shadow sweeps over them, making the approaching umbra more noticeable. 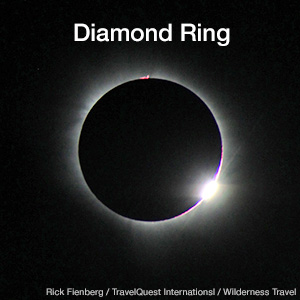 Shadow Bands Very dim, undulating ripples of dark and light might appear, flowing across the ground or the side of a white building. These hard-to-see features are caused by atmospheric refraction of the thin solar crescent just prior to second contact and/or immediately after third contact.

Emerging Corona Some 30 seconds before totality, cover the shrinking solar crescent with your outstretched thumb and remove your eclipse viewers. You’ll likely spot the Sun’s corona (its outer atmosphere) on the side opposite the crescent. But if you do this, you might miss the next two events!

Baily’s Beads Just prior to totality, all that remains of the Sun are a few shafts of light shining through deep valleys on the lunar limb (edge). The result is a few brilliant beads that disappear one after another. If you’re using a telescope or binoculars to observe the beads, keep your solar filters on. If not, take the filters off once the number of beads dwindles to two.

Diamond Ring The lunar shadow envelops you. Only a single bead remains — it shines like a brilliant diamond set into a pale ring created by the pearly white corona surrounding the Moon’s black silhouette. Filters off!

Second Contact: Totality Begins! The last bead vanishes, the solar surface is hidden, and the Sun’s ghostly, gossamer corona glows around the black lunar silhouette. Feel free to scream and yell in delight, or just stare in silent awe.

Chromosphere and Prominences For a brief time after the start of totality, the Sun’s chromosphere (thin middle atmosphere) remains visible along the solar limb (edge) still being covered by the advancing Moon. This vivid arc of red vanishes quickly, so don’t miss it. Depending on how active the Sun is, you may spot several streamers of red stretching up from the chromosphere into the corona. These are solar prominences, and they, too, soon disappear behind the encroaching lunar limb. 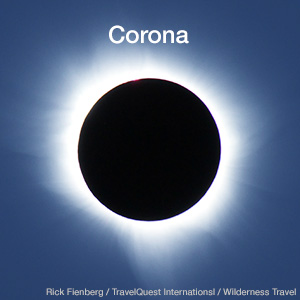 The Corona Now’s the time to explore the solar corona, the star of the show. Using just your eyes, take a few moments to carefully study the appearance of the corona near the Sun. Can you detect any color? Does the corona look smooth or mottled? Use averted vision (stare at the eclipsed Sun, but concentrate your attention on the corona streaming away from either side of the Sun) to determine how far east and west the faint, outer corona extends. Is it rounded or elongated? Now use binoculars or a telescope to check out detail within the corona. Look for loops and arcs that reveal solar magnetic fields, and compare the structure of the corona at the Sun’s poles and equator (it’s often quite different).

Planets and Stars Brilliant Venus will likely be visible even before totality. Some of the other planets (notably Jupiter on August 21, 2017, and perhaps Mars and Mercury too) and a few bright stars (notably Regulus, in Leo, on August 21, 2017) might put in an appearance. But don’t spend too much time looking for them — totality is fleeting!

Sky and Horizon Sky darkness during totality varies from eclipse to eclipse. How dark it gets depends on the Moon’s angular size, the presence or absence of clouds, and how close your site is to the centerline. Just outside the path of totality, the Sun is still shining, albeit dimly. This feeble light creates a beautiful 360° sunrise/sunset glow around the horizon. Don’t miss it.

Experience Totality Beware of spending totality with your eye glued to your camera’s viewfinder. Taking pictures is fine, but make sure you take time to appreciate what is truly a total sensory spectacle. If you’re using a telescope to examine the stunning detail in the corona, pause for a few moments, look away, and absorb the surrounding vista. 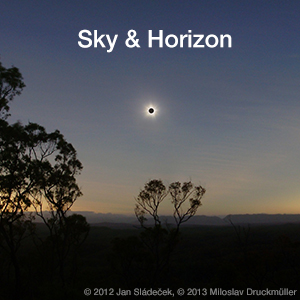 Totality’s Finale Yes, both the sky and the edge of the corona opposite where the Sun vanished really are a little brighter now. Fingers of red (prominences) slowly rise from behind the Moon’s retreating limb. They are soon joined by an emerging arc of red light — the chromosphere. The end of totality is imminent.

Third Contact: Diamond Ring One blazingly bright bead of sunlight erupts into view. Totality is over. Solar filters on! The stages of the eclipse now repeat in reverse order.

Baily’s Beads More rays of sunlight burst through lunar valleys and quickly combine to form a very thin crescent. The solar crescent rapidly expands, and the sky brightens quickly. If you want a few more seconds of corona viewing, block the emerging Sun with your thumb.

Shadow Bands These dim ripples of dark and light may appear briefly while the solar crescent remains extremely thin.

Retreating Shadow If you’re not busy watching for shadow bands or squeezing in a few more seconds of corona viewing, quickly look away from the emerging Sun. Can you see totality’s wave of darkness speeding rapidly into the east?

Temperature The temperature will likely continue to cool slightly after totality concludes and begin to rise shortly thereafter. However, the change may be subtle and could be masked by a shift in wind speed and direction.

Animal and Human Behavior As the Sun emerges, so too will any wildlife that, as totality approached, decided something odd was happening and started to go to sleep. Meanwhile, your eclipse-watching companions will be happily chatting among themselves, comparing images, and probably ignoring the returning solar disk.

Sharp Shadows While the Sun remains a thin crescent, shadows are much sharper than usual. If you forgot to look at your own shadow on the ground before totality, be sure to look now — you'll see crisp shadows of hairs on your head or arms.

The Returning Sun Just as it took a while for the Moon to cover the Sun, it will take an equally long interval — more than an hour — for the Moon to move off the solar disk. (The time between third and fourth contact will seem much, much longer than between first and second contact!) But don’t lose track of time — you’ll want to witness the official end of the eclipse.

Fourth Contact: The Eclipse Ends The last tiny indentation on the Sun disappears, and the Moon no longer covers any part of the solar surface. The eclipse is officially over.

The key to not becoming overwhelmed by the sight of totality is to create a short list of what you really want to see and do, memorize it, and stick to it. Otherwise, you’ll spend your time gaping at the hole in the sky and totality will fly by — in what will seem like eight seconds.

What If It’s Cloudy?

Eclipse veterans like to use the phrase “experience totality” rather than “see totality,” because a total solar eclipse is the only celestial phenomenon that truly overwhelms the senses. Most astronomical observing involves straining to perceive something at the limit of visibility — a faint galaxy, a dim double-star companion, or a tiny festoon in Jupiter’s clouds. A solar eclipse is the most extreme exception to this rule. You don’t have to use averted vision, special filters, or other tricks to experience totality. You just have to put yourself in the right place at the right time and hope for clear skies. When the Moon’s shadow arrives, it hits you over the head.

But what if you don’t have clear skies? Unwelcome clouds are always a possibility.

Without doubt, the highlight of any solar eclipse is the gossamer corona, which is visible only if the sky is relatively clear and transparent. But many of the other phenomena described above can be experienced even if clouds cover the Sun. For example, it will get dark, the temperature will go down, any wildlife in the area will exhibit changes in behavior, and your fellow eclipse watchers will make sounds — though perhaps not happy ones.

You can take some comfort from remembering that even under perfectly clear skies, it’s impossible for a single observer to take in everything that happens during a total solar eclipse. You can’t look up in the sky at the last sliver of Sun at the same time you’re looking down at the ground for shadow bands. You can’t admire the pretty sunrise/sunset colors around the horizon while you’re examining coronal streamers in a telescope. So even in ideal conditions, you end up seeing some things that others miss, and missing some things that others see.

If you made the effort to get into the path of totality on August 21, 2017, and ended up being "clouded out," it's only natural to be disappointed. Conversely, if you saw the solar corona on August 21st, especially if it was your first time, you'll be eager to see it again. Either way, you're in luck! Another total solar eclipse will grace the continental U.S. on April 8, 2024. That's remarkable when you consider that the wait between the last two, in 1979 and 2017, was 38 years!

For catalogs of all upcoming solar eclipses, including partial and annular ones, visit the websites listed in our Resources section.

More Articles About What You'll Experience During a Solar Eclipse

Some of this information is adapted from material provided to its travelers by solar-eclipse-tour operator TravelQuest International.