The following are a number of terms used to describe various aspects of solar eclipses. You’ll find many of them used throughout this website and will encounter others on other sites and in the media as we get closer and closer to the August 21, 2017, solar eclipse across America.

Annular eclipse: A solar eclipse where the apparent diameter of the Moon is too small to completely cover the Sun. At mideclipse, the Sun appears as a blindingly bright ring surrounding the Moon.

Annularity: The maximum phase of an annular eclipse, when the Moon’s entire disk is seen silhouetted against the Sun. Annularity occurs between second and third contact. It can last from a fraction of a second to a maximum of 12 minutes 30 seconds.

Antumbra: The extension of the Moon’s shadow beyond the umbra. Within the antumbra, the Sun appears larger than the Moon, which is visible in silhouette. An observer standing in the antumbra sees an annular eclipse.

Baily’s Beads: Caused by shafts of sunlight shining through deep valleys on the lunar limb (edge), they look like a series of brilliant beads popping on and off. They appear just prior to second contact and just after third. They’re named after the English astronomer Francis Baily, who first described them during the annular eclipse of May 15, 1836.

Chromosphere: A thin, red-colored layer of solar atmosphere located just above the photosphere. It is briefly visible immediately after second contact and just prior to third.

Corona: The Sun’s upper atmosphere, visible as a pearly glow around the eclipsed Sun during totality. Its shape (sometimes elongated, sometimes round) is determined by the Sun’s magnetic field and is linked to the sunspot cycle.

Diamond ring: A single Baily’s Bead, shining like a brilliant diamond set into a pale ring created by the pearly white corona. It’s the signal that totality is about to start (second contact) or has ended (third contact). 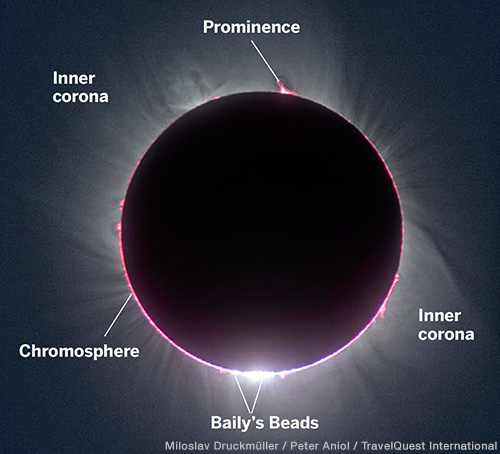 Duration: The time between second and third contact during a total or annular solar eclipse.

Eclipse obscuration: The fraction of the Sun’s surface area covered by the Moon. Do not confuse it with eclipse magnitude (see previous item). When 50% of the solar surface is obscured, the eclipse magnitude is roughly 60%.

Ecliptic: The plane of Earth's orbit around the Sun or, equivalently, the plane of the Sun's apparent motion around the sky throughout the year.

First contact (C1): The moment when the Moon takes its first tiny nibble out of the solar disk — the beginning of the partial phase of an eclipse.

Fourth (last) contact (C4): The instant when the Moon no longer covers any part of the solar disk. This signals the conclusion of the partial phase of an eclipse.

New Moon: The lunar phase when the Moon is located in the same direction in the sky as the Sun. New Moon is the only lunar phase during which an eclipse of the Sun can occur.

Penumbra: The portion of the Moon’s shadow in which only part of the Sun is covered. An observer standing in the penumbra sees only a partial solar eclipse.

Photosphere: The visible surface of the Sun, which consists of a gas layer at a temperature of roughly 5,500° Celsius (10,000° Fahrenheit).

Prominence: Hot gas hanging just above the solar surface, usually appearing as a red-colored arc or filament hovering in the lower part of the corona. Prominences are quickly covered by the Moon after second contact and revealed just prior to third.

Saros: An eclipse cycle with a period of 6,585.32 days. When two eclipses are separated by a period of one Saros, the Sun, Earth, and Moon return to approximately the same relative geometry, and a nearly identical eclipse will occur (though the eclipse path will be shifted west by eight hours — one third of Earth’s rotation).

Second contact (C2): The instant when the total or annular phase of an eclipse begins. For a total eclipse, this is synonymous with the disappearance of the first diamond ring.

Shadow bands: Very faint, shimmering ripples of dark and light moving across the ground, walls, or clouds. These hard-to-see bands result from atmospheric “twinkling” of the thin solar crescent just before second contact and/or just after third contact. When they occur at all (they're not reported at every total eclipse), they’re best seen against a white background.

Sunspots: Dark regions on the Sun where magnetic fields are bundled together and are so strong that the flow of hot gas from the Sun’s interior to the surface is inhibited. The spots appear dark because their temperature is about 1,000° Celsius (1,800° Fahrenheit) cooler than the photosphere that surrounds them.

Third contact (C3): The instant when the total or annular phase of a solar eclipse ends. For a total eclipse, this is synonymous with the appearance of the second diamond ring.

Total eclipse: A solar eclipse where the apparent diameter of the Moon is large enough to completely cover the Sun’s photosphere (even if only momentarily) and reveal the faint solar corona.

Totality: The maximum phase of a total solar eclipse, during which the Moon’s disk completely covers the Sun's bright face. Totality occurs between second and third contact. It can last from a fraction of a second to a maximum of 7 minutes 31 seconds.

Umbra: The darkest part of the Moon’s shadow, within which the entirety of the Sun's bright face is blocked. Within the umbra, the Moon appears larger than the Sun. An observer standing in the umbra sees a total solar eclipse.

Umbraphile A solar-eclipse aficionado; a person who will do almost anything, and travel almost anywhere, to see totality. Another term for an umbraphile is "eclipse chaser."

Some of this information is adapted from material provided to its travelers by solar-eclipse-tour operator TravelQuest International.