Skip to main content
Eclipse America / When & Where to See the Solar Eclipse of August 21, 2017

And here are some words, though far less than 1,000 of them:

It takes about 90 minutes for the Moon's dark shadow to cross the country, starting around 10:15 am Pacific time on the West Coast and ending around 2:45 pm Eastern time (11:45 am Pacific time) on the East Coast. When you hear someone say, "the total eclipse lasts 90 minutes," that's what they mean. But that could be misleading: At any given location within the path of the Moon's shadow, the total eclipse lasts at most 2 minutes 40 seconds — don't be late!

Here's a table with times for a handful of U.S. cities and towns in the path of totality, courtesy of NASA: 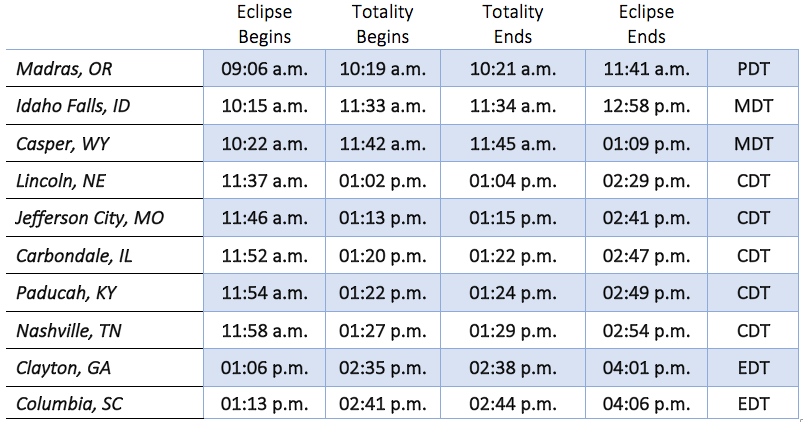 To find out when the eclipse occurs at any other location (and what it will look like from that location), visit TimeandDate.org or use any of the interactive Google maps and/or eclipse calculators on our Maps & Calculators page.

This part is much more important! In order to have a total eclipse of the Sun on August 21, 2017, you must position yourself within the roughly 70-mile-wide track labeled "Path of the total solar eclipse" in the map above. Within the path of totality, weather permitting, you will see one of the most spectacular sights in all of nature: the solar corona — the Sun's pearly outer atmosphere, which you can look at directly without solar filters or other protective measures. Outside the path of totality, you will see at most a partial solar eclipse, and only if you take special precautions to avoid eye injury (as explained on our Eye Safety pages).

Everybody is asking, "Where should I go to see the eclipse?" There is no one right answer. Here are several right answers:

See our Maps & Calculators section for higher-resolution views of the path of totality, including interactive Google maps that give times for the beginning, middle, and end of the eclipse at any location within or outside the path.

Some Recommendations on Where to Go for the Eclipse